Sam Siciliano, author of ‘The Further Adventures of Sherlock Holmes: The White Worm’

IAN RICHARDSON
Jeremy Brett and Ian Richardson were contemporaries, born in 1933 and 1934, only months apart, and both were distinguished stage actors, especially Richardson. He was chosen in 1982 by the American producer Sy Weintraub to make six Sherlock Holmes films for TV, but only two were completed: The Hound of the Baskervilles and The Sign of the Four. When the Granada Brett series was launched in 1984, the other films fell by the wayside. Despite their similar backgrounds, the two men are very different as Sherlock Holmes. Each is brilliant in his own way, but Richardson is an almost gleeful Holmes with a certain ironic glint. He is also quite sane compared to Brett! There is none of the maniacal energy or neurotic flare. Physically, both men were ideal for the part, although Brett was taller. Both also had fantastic voices, although again, Richardson excelled at irony.

I recently watched Richardson in Hound of the Baskervilles, and it is well worth a look. His Holmes in disguise is very good, but, as in the novel, he is offstage throughout much of the story. I’m looking forward to seeing Richardson in Sign of the Four sometime soon. In the end, Richardson was glad not to have been tied to the role as Brett was.

JONNY LEE MILLER
Elementary is by far my favourite adaptation of the Sherlock Holmes mythos, with Jonny Lee Miller as the definitive detective. Really, the show is less of a modern-day adaption of the Holmes canon, more a smart, original, weird detective show which merely takes inspiration from Conan-Doyle’s work, borrowing plot elements and characters here and there while charting its own course. Miller’s casting is pitch-perfect—his Holmes is a recovering drug addict: decidedly eccentric, unpredictable, and often hilariously odd. Far more than other other incarnations of Holmes, Miller’s portrayal captures the “otherness” of the character. His Holmes is an outsider, one who moves among the rest of us but who is somehow different, apart. He’s the perfect foil to Lucy Liu’s calm, measured, frequently frustrated Watson. The two are balanced so well—as she learns about detective work from him, so he learns how to deal with people and life in general. I’m a fan of the original Holmes canon, but Elementary really is a breath of fresh air.

JEREMY BRETT
Until he took the lead role in the Granada TV series The Adventures of Sherlock Holmes, which ran from 1984 to 1994, Jeremy Brett was best known for playing Freddy Eynsford-Hill in the 1964 movie of My Fair Lady. Charming though he was as Eliza Doolittle’s failed suitor, mooningly crooning “On the Street Where You Live”, Brett was a revelation as Holmes. He portrayed the great detective as a manic whirlwind of impulsiveness and arrogance. He would berate Watson (first played by David Burke, then much more engagingly by Edward Hardwicke) like an impatient but loving adult scolding a child. He would hurl himself onto the ground to inspect a footprint or other clue. His hands flew around like startled birds, occasionally coming to rest together at his lips when he sank deep into thought. He captured brilliantly both the lassitude and the energy of Holmes. It was a mannered performance that teetered on the brink of histrionic but never fell over the other side.

As the series progressed, the more obvious it became that the actor was suffering health problems. The lithium Brett was taking to counteract his bipolar disorder caused water retention. Episode by episode, he grew paler and puffier before our very eyes. At the same time he felt the character was taking him over. He would have nightmares about being Holmes and believed the part was putting his sanity in peril. Yet he persisted, even through ill health, giving his all to leave us with an indelible – and arguably unimprovable – screen Sherlock.

Guy Adams, author of Sherlock Holmes: The Breath of God

PETER CUSHING
When I was a child falling in love with Hammer movies I looked at the frequent double-act of Cushing and Lee and was always drawn to Lee. He was bigger, more obvious, Cushing seemed too gentle to my idiotic young eyes. A few decades (and a laughably chaotic “career” as an actor) has shown me the error of my ways.

Cushing was a genius, a powerful, precise, brilliant actor. Brimming with presence, honesty and a delicate touch that raises him amongst the greatest actors ever to fill a screen. 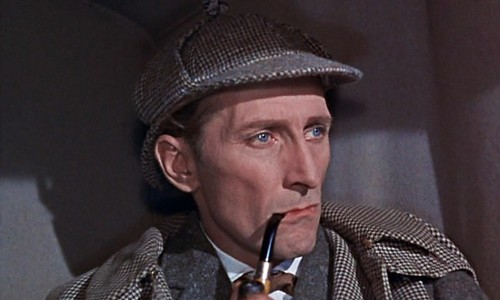 He took over from Douglas Wilmer in the BBC’s somewhat tortured series of TV adaptations (like Wilmer, Cushing was never happy with the series) but his real moment of stardom in the role was nine years earlier in Hammer’s adaptation of The Hound of the Baskervilles (of course, Hammer could never resist the monstrous hound). With the equally wonderful Andre Morell as Watson, Cushing took the limited screen time afforded Holmes and sparkled throughout. Witty, energetic, authoritative and utterly perfect.

George Mann, author of Sherlock Holmes: The Will of the Dead

RUPERT EVERETT
Perhaps it’s a bit of a left-field choice, but one of my favourite performances as Sherlock Holmes comes from Rupert Everett in Sherlock Holmes and the Case of the Silk Stocking, a one-off BBC TV film from 2004.

There’s something about the way in which Everett captures the haunted mood of Holmes – the peaks and troughs of his enthusiasm, his ever-so-slightly-over-the-top theatrics, his lack of patience with Watson and the police – that really struck a chord with me. The whole production has a melancholy air, and the fog never lifts, from the streets, or from Holmes himself.

I still imagine a parallel universe in which the BBC went on to make a whole series based on this Edwardian-set drama, and we could treat ourselves to boxed sets brimming with stories featuring Everett’s erudite, camp, haunted version of the character.

What about you – who is your favourite Sherlock? Let us know @maximumpopbooks.

BONUS! We’ve got 4 spectacular Sherlock bundles to giveaway, which include the following…

WIN! We've got 4 #Sherlock bundles to give away! Follow & RT to enter. Ends 8/2. #WeLoveTitans @TitanBooks pic.twitter.com/KfntTVJGC1