So, the new trailer for The Hunger Games: Mockingjay Part 1 dropped yesterday, and our mouths dropped… to the floor. You can look all over the internet for people analysing every frame, every word and every second of it, and we thought we’d do the same. Unfortunately we asked our Maximum Pop! meerkat to do the screen grabs so we’ll just have to roll with what we’ve got. Interns…

Well, this is just some black. It’s not a good start.

Katniss is back! We had a feeling she would be.

President Snow is back and our MP! meerkat chose the most awks moment to screen cap this – just look at his eyes #crazy

Phillip Seymour Hoffman, the one out of The Kids Are All Right and GALE are back! Mmmmm, Gale.

And.. this guy is back. What’s his name again? Dude with the glasses and facial hair who’s nice to old people. You know the one.

We’ve had this shot already. If we had to compare our MP! Meerkat he wouldn’t do very well.

Also back is… hey wait, is that EFFIE?!? You rock that #nomakeup look. Although we reckon this is more about character development and turning her back from the Capital than following that Facebook trend from a few months ago.

“Peeta is now the Capital’s weapon”. Still a babe though, right?

This guy is a babe too though, even if he is pulling a bit of sillyface. Apparently the actor is married in real life, but if he’s ever single again then we have great taste in music and love animal – we even gave a meerkat an internship.

Natalie Dormer (aka Marjorie Tyrell from Game of Thrones) is getting in on the action too. A lot of you are probably too young for Thrones but trust us: this girl is going to be huge, and she’s a great actor – just look at that shade she’s throwing.

Gale may be the most babe-ilicious of all the Hunger Games men (sorry Guy with glasses and facial hair), he looks wonderful even in this awkward screencap.

Inserts reference to Singin’ in the Rain/Set Fire to the Rain/Rain Rain Go Away.

There’s plenty of action shots in the trailer that we can’t really do justice to in screencap form, like an exploding damn and shooting down jets with arrows, so here’s the trailer in full:

As the bit at the end says, Mockingjay Part 1 is out November 20th. Someone’s going to have to go at midnight to bring you the first verdict right? 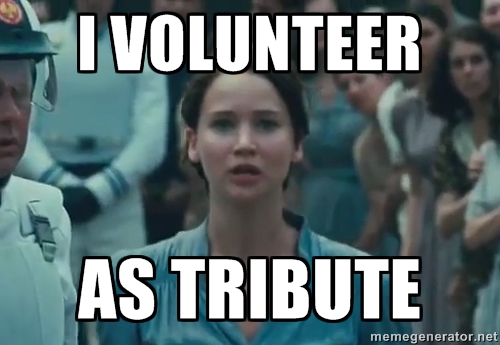